To help validate identities, SSH has a key management capacity and related agents. When configured with public key authentication, your key proves your identity to remote SSH hosts.

An SSH-based identity consists of two parts:a public key and a private key:

Your public key represents who you will allow inbound access to through your gate or lock. Public keys need not be kept secret; they cannot be used to compromise a system or for unwarranted access into a system. On a UNIX or Linux system, these private and public key pairs are stored in ASCII text files; on Windows systems, some programs store the key pairs as text files, some in the Windows registry.

Multiple identifications using multiple private keys can be created with an SSH Protocol 2 configuration. Let's look at how to generate, set up, and configure an SSH private and public key pair on typical Linux hosts. 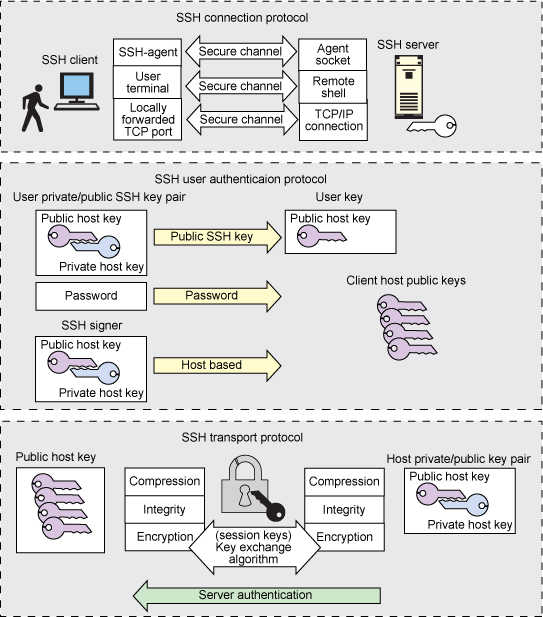 The example shown below uses the ssh-keygen utility to create the SSH private-public key pair with the type of dsa.

The following example, shows the first-time SSH command to the remote server thereby caching the key within your server's .ssh/known_hosts file. You enter the same passphrase with which you created the SSH private-public key pair, and the output of the command run on the remote destination server is seen locally back on your source server.