As a seasoned NetWorker and Solaris administrator I've used nsrwatch pretty much everyday within my working carreer. Under Solaris and other flavours of UNIX and Linux this utility is invaluable in monitoring what operations are occurring within NetWorker from a system terminal session. In later years as I use NetWorker across multiple platforms the only drawback I've had is that nsrwatch was never available for a Legato NetWorker server running on Microsoft Windows -- well up until now!

With the release of NetWorker 7.6SP2 (I think it also appeared in 7.5SP4 but I don't have a copy to confirm) and subsequent later releases the nsrwatch utiity has now been ported to the Windows platform. 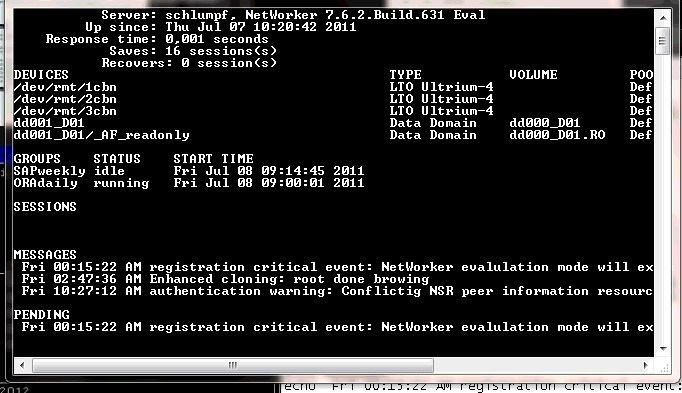 The main advantages of using nsrwatch over NetWorker Management Console, is that NMC operations are usually delayed by a couple of seconds, whereas nsrwatch displays operations in near realtime, and secondly it is quicker to start nsrwatch than the java based NMC console.